VOTES FOR WOMEN: A PORTRAIT OF PERSISTENCE

The River of Time Museum proudly displays this poster exhibition designed by the Smithsonian Institution Traveling Exhibition Service and the National Portrait Gallery in recognition of the 100th anniversary of the ratification of the 19th Amendment giving women the right to vote.

The suffragette movement lasted over 80 years and involved thousands of women in every state in the Union. Leaders such as Susan B Anthony, Alice Paul, Carrie Chapman Catt, to name a few, struggled for years, giving speeches, attending meetings, rallies and marches, organizing and educating for a dream that finally came true in 1920.

However, the women in Arizona earned the right to vote in 1912 as part of Arizona’s admission to the Union as the 48th state. But it wasn’t easy. Consider the fact that the population at the time was just over 205,000 spread over 114,000 square miles consisting of mountains, desert, valleys and forests and few roads or telegraph lines in which to convey messages or plan strategies.

That did not stop Francis Munds and Pauline O’Neill. Even though they met strong resistance , Munds and O’Neill developed a strategy that worked against politicians who refused to endorse suffrage thus gaining the vote from all five political parties active in Arizona at the time. Francis Munds went on to become Arizona’s first woman state senator leading the way to today’s strong voter participation by women and, for the first time in Arizona, both Senators are women. 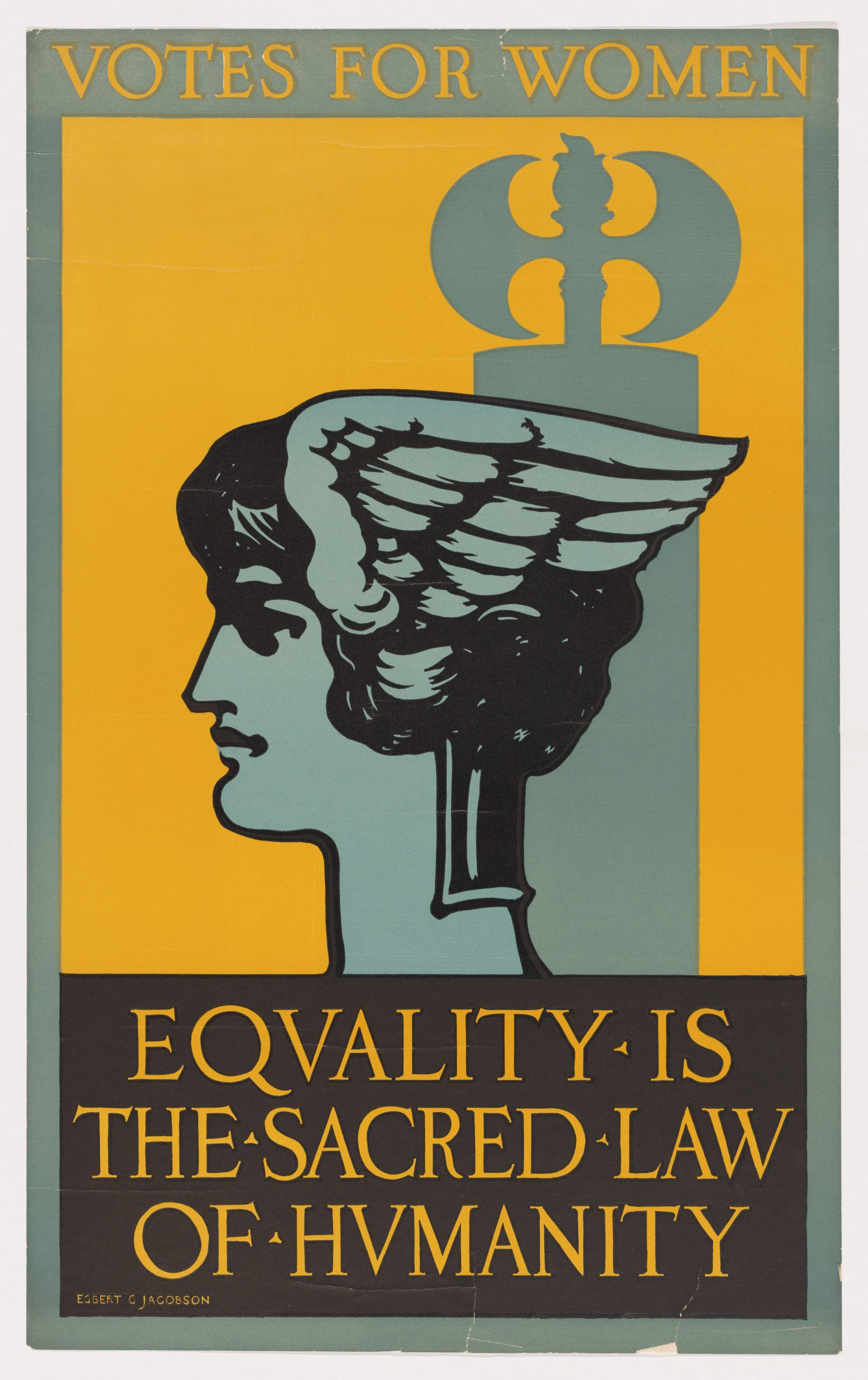 The use of symbols drawn from ancient Greece and Rome appealed to conservative values and asserted the respectability of the suffragist movement. A woman in profile wears a winged petasos helmet to illustrate her role as a divine messenger of equality, while the bundle of sticks around an axe symbolizes strength through unity. Egbert Jacobson, a graphic designer and a leader in color theory and typography, was married to a prominent suffragist, Franc Delzell Jacobsen—and he, like many men, supported her cause. Equality Is the Sacred Law of Humanity, c. 1903–1915 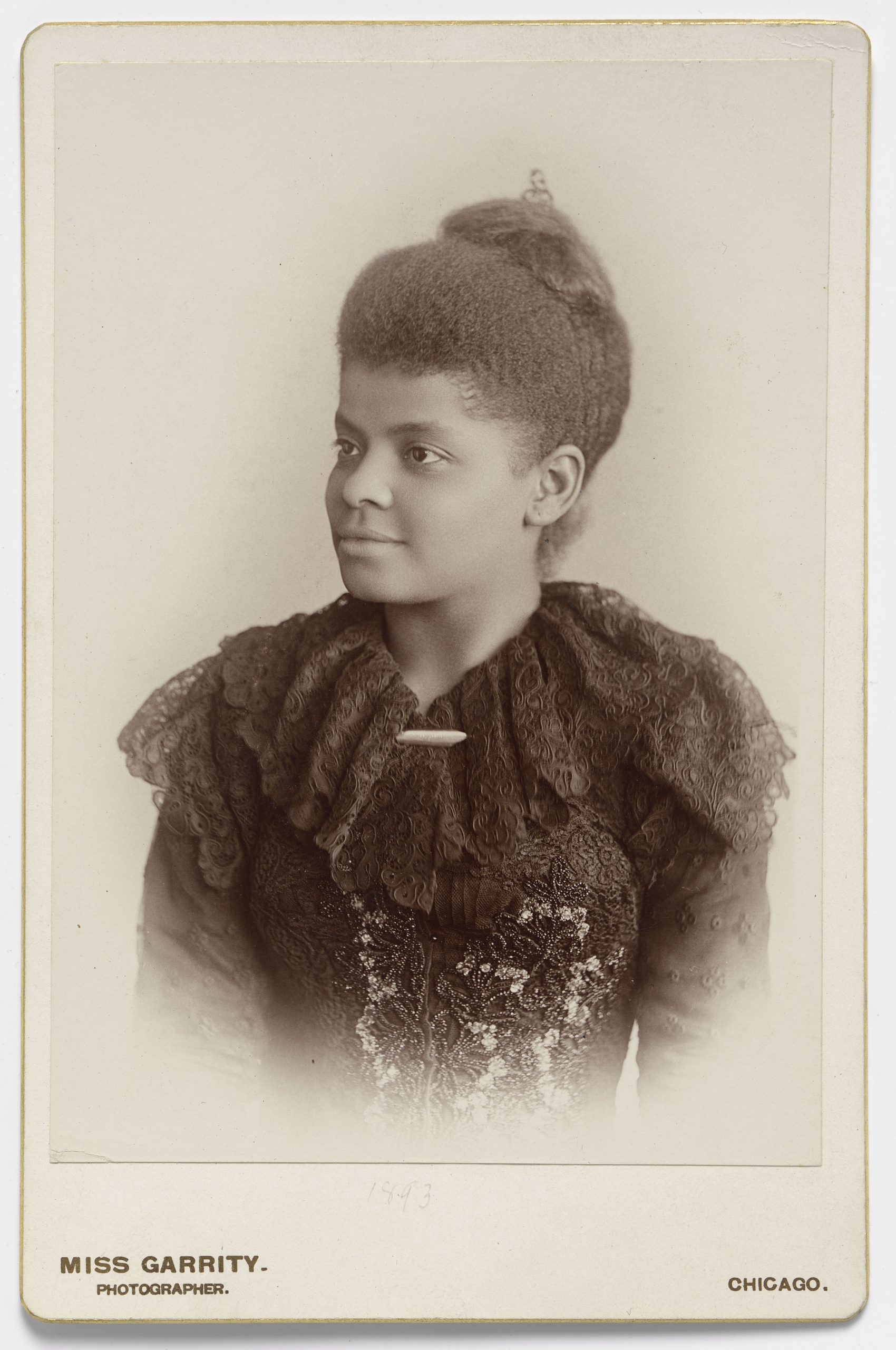 An investigative reporter who crusaded against lynching, Ida B. Wells (1862–1931) was one of the most important journalists of the late 1800s. At the 1913 suffrage march in Washington, D.C., she refused to walk in the back where Black women were being segregated. Instead, she took her place at the front of the Illinois delegation. 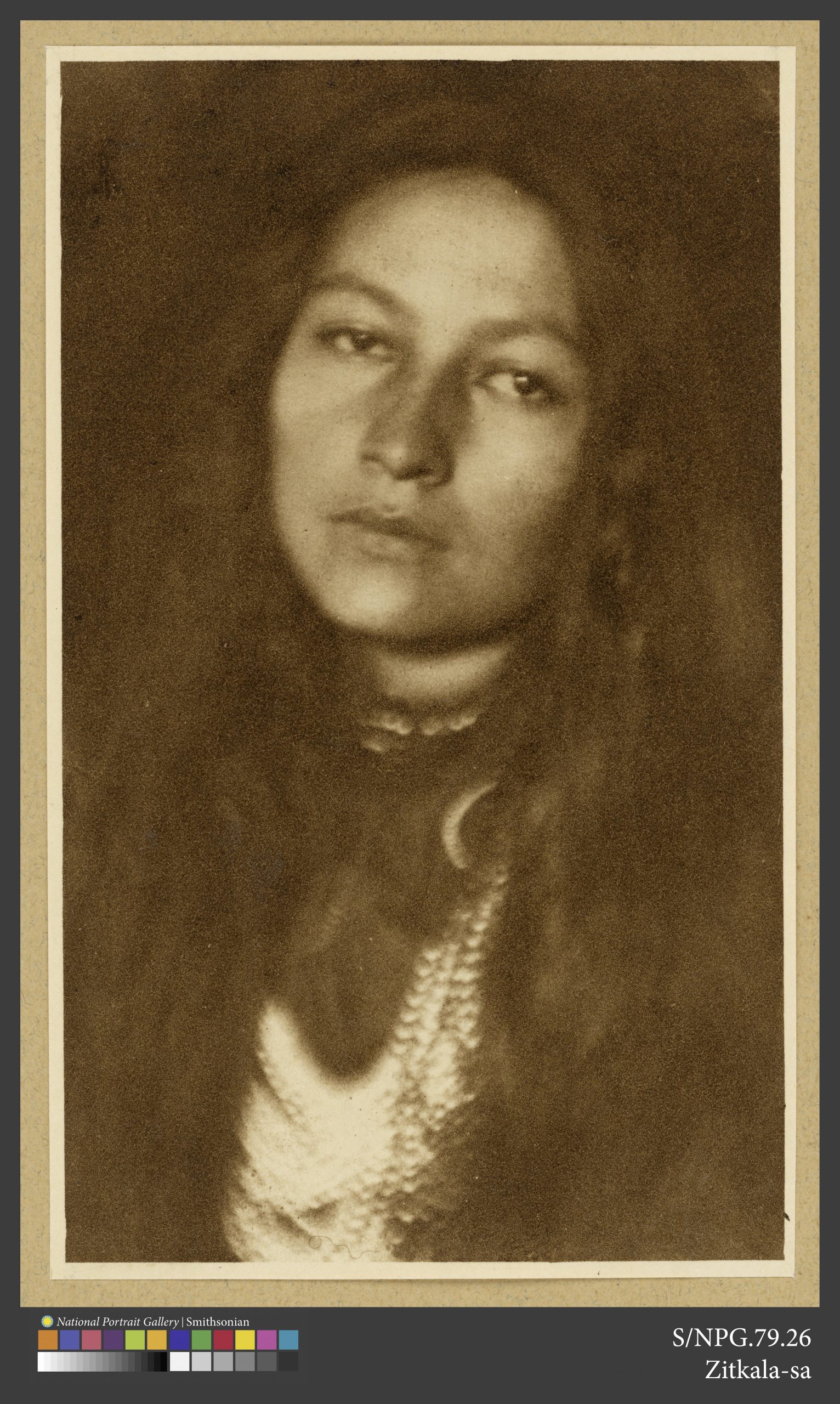 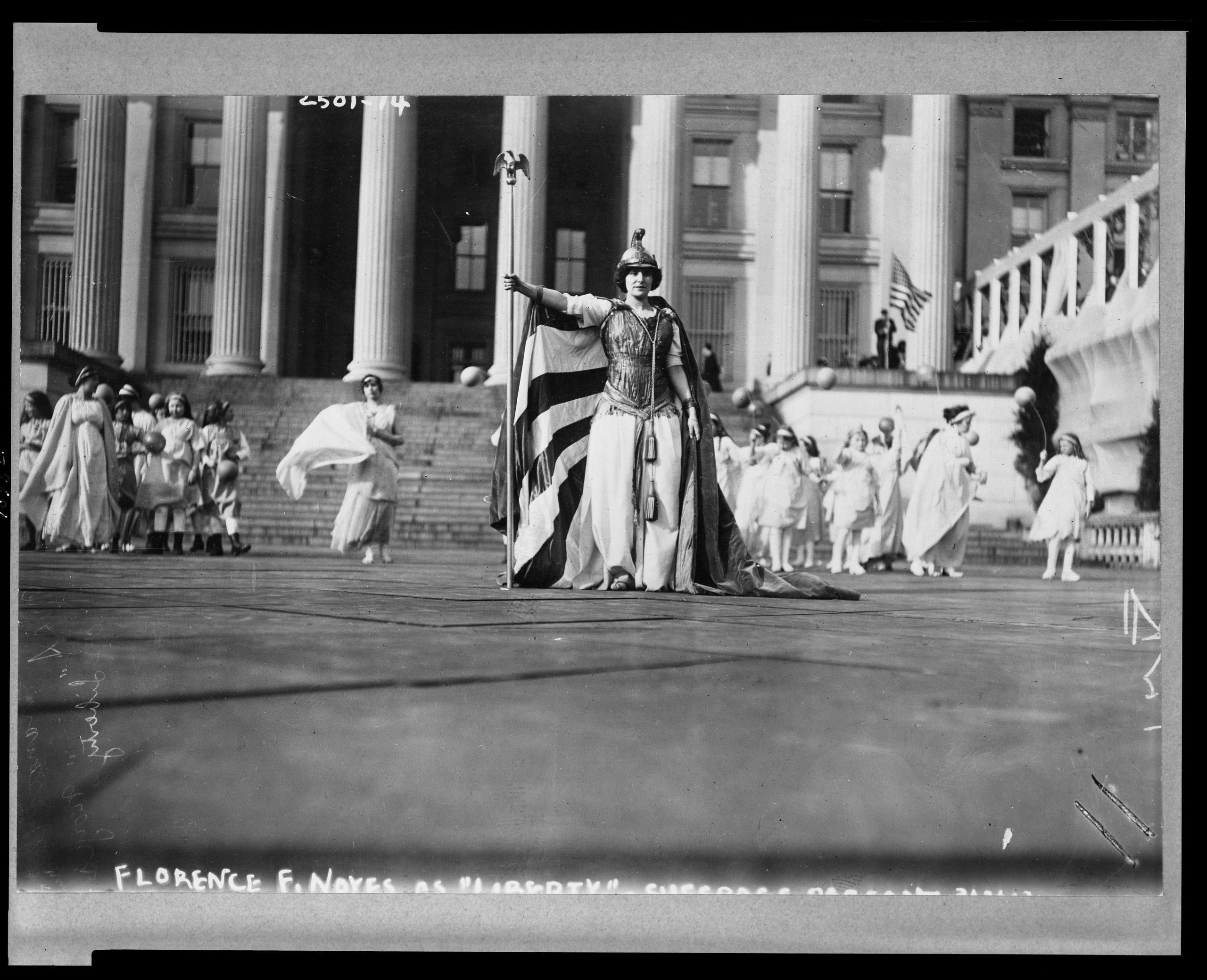 On March 3, 1913, 5,000 women suffragists processed down Pennsylvania Avenue in Washington, D.C. Played by actor Hedwig Reicher, Columbia gave them her approval and endorsement of their cause, symbolically granting the women the right to vote.

College Women Picketing in Front of the White House, 1917

In the first such protest in history, women picket the White House every day from January 1917 until the 19th Amendment was ratified in August 1920. On this day, college-educated women worked the picket line.

Click on each poster image to view the poster and use the links below to download for further details. 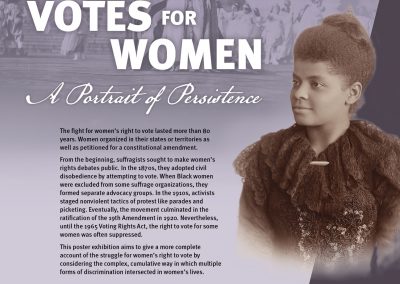 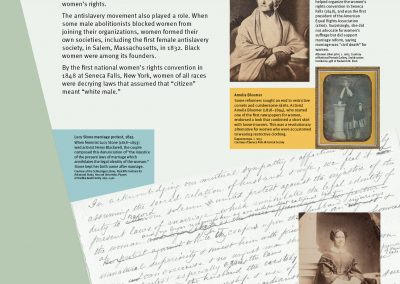 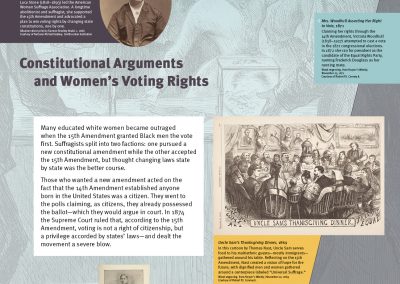 The Concept of Citizenship Seems Straightforward, but… 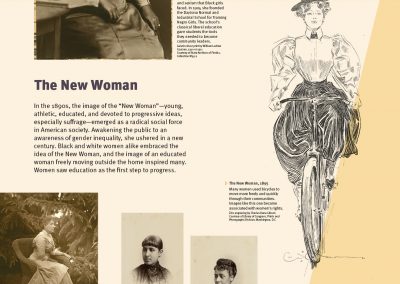 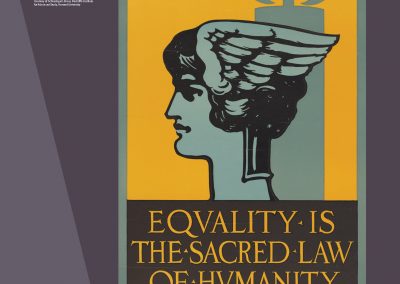 Equality is the Sacred Law of Humanity 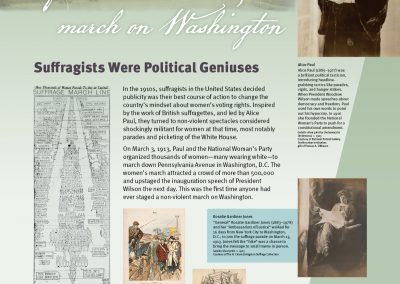 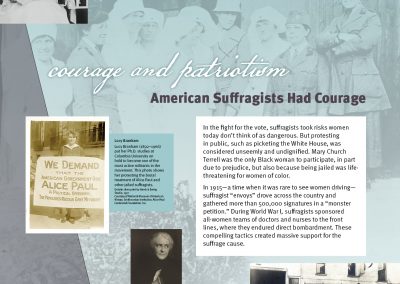 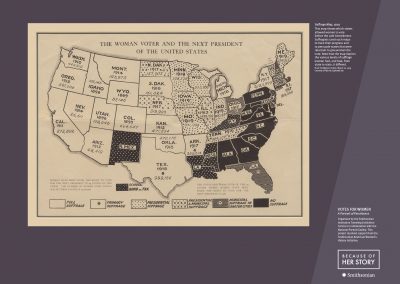 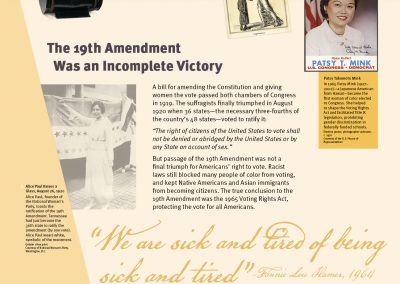 The 19th Amendment Was an Incomplete Victory

To view the posters in more details download using the links below.